Today we present to you Stephanie D'Hose! Stephanie is the president of the Belgian Senate since October 2020. She is the fifth woman to hold this position in Belgian History and the youngest person to do so in Europe. 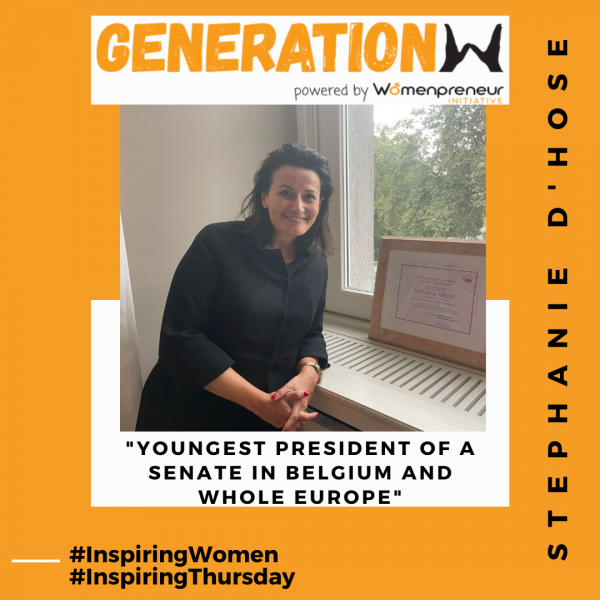 After graduating in political sciences at Ghent University, she first became a parliament counsel between 2009 and 2014. In the meantime, she was elected city councillor of Ghent, a position that she is still holding in 2021. She was also the Deputy Head of Cabinet to Sven Gatz, who was then the Flemish Minister of Culture, Youth, Media and Brussels. Finally, in 2019, Stephanie D’Hose was elected a Member of the Flemish Parliament. Thus, her political career was already well under way before being appointed president of the Senate.

Since being in office, Stephanie D’Hose wants to work on reforming the Senate. Her program is aligned with the one of Alexander de Croo’s government. Indeed the Vivaldi coalition is committed to initiate a debate on the future of the Senate, as well as on the Constitution and the legislation.  By doing so, they aim to “modernise and reinforce democracy, the Rule of Law, and fundamental rights”.

Stephanie d’Hose is a firm believer in women’s rights and women’s talent. With Eliane Tillieux, the president of the Belgian Chamber of Representatives, she shared her will to enhance gender equality, including on the questions of wages and parental leave. They both aim for Belgium to reach the top of the European ranking in terms of gender awareness.

During a vivid meeting with our Director Sana Afouaiz, Stephanie d’Hose expressed her interest in collaborating with Womenpreneur to support equal rights and equal opportunities for women.